After the huge success of my blank book, What Every Man Thinks About Apart From Sex, I decided to create a follow up book called How To Cure Insomnia which features a cartoon illustration of a numbered sheep printed on each page.When the pages are flicked, the sheep appears to jump, as you can see in the video below. The book is for sale on Amazon and the press release for the book is also below. 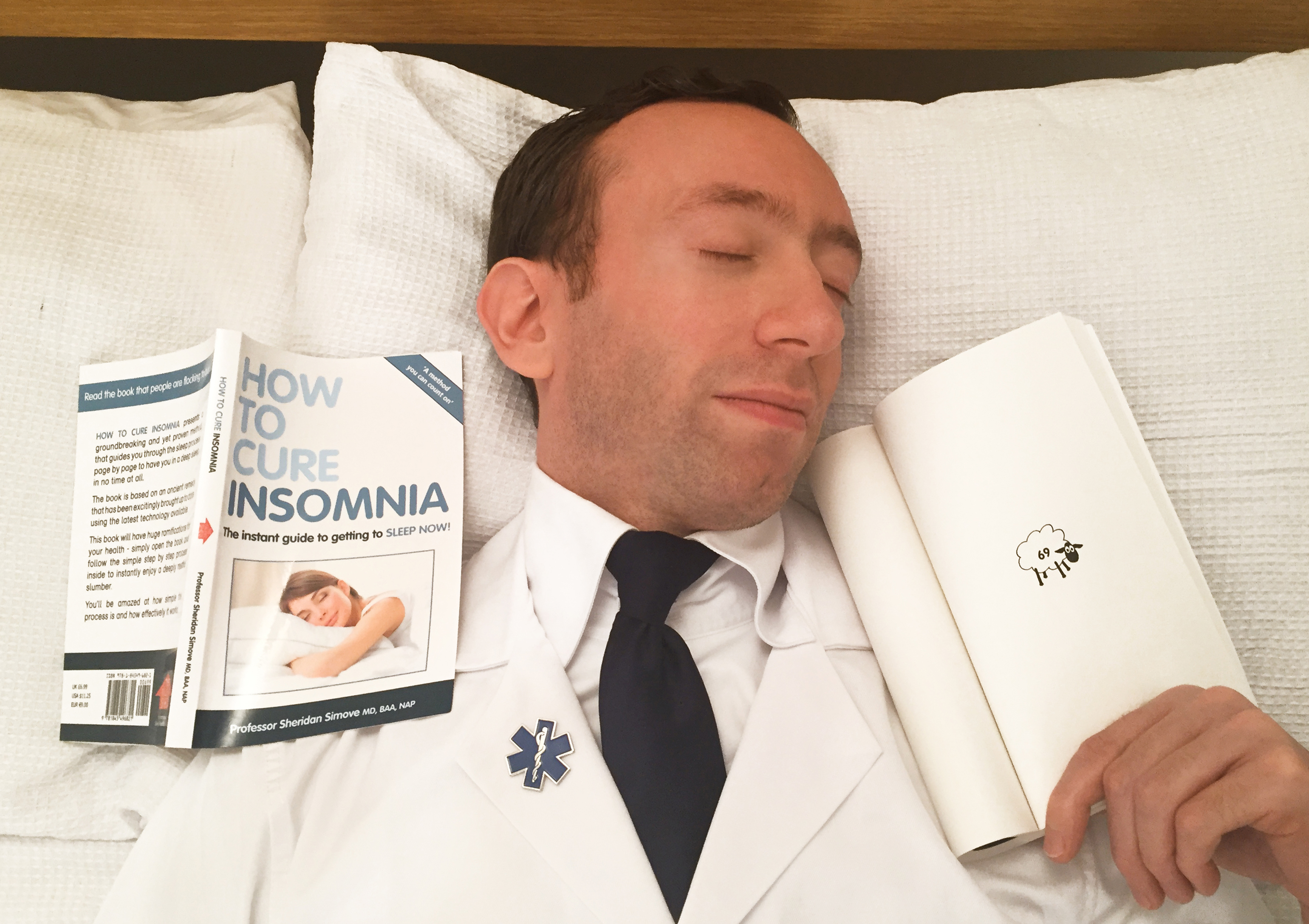 A world-record breaking author is hoping to score his second bestseller without penning a single word.

Sheridan Simove found himself in the Guinness Book of Records after selling more than 100,000 copies of What Every Man Thinks About Apart From Sex – a book containing 200 empty pages.

The paperback was a worldwide hit and was even translated into ten languages including Spanish, Dutch, Mongolian and Chinese.

He is now hoping to break his own world record for best selling book with entirely blank pages with the sequel – How To Cure Insomnia.

The follow up book again contains 200 pages, but this time with the right hand pages displaying numbered cartoon sheep.

The self-proclaimed ‘Professor’ Simove believes the book offers the perfect antidote to those suffering with insomnia and could even save the NHS money.

The publication comes after a previous record attempt was crushed by lawyers representing 50 Shades of Grey author EL James.

But lawyers representing Ms James argued the publication infringed her copyright and ordered the entire print run be pulped.

Now at last Mr Simove is hoping to beat his own world record and offer genuine assistance to the millions of people worldwide who struggle to get enough sleep.

The author spent eight years writing two genuine books, Ideas Man and Success Or Your Money Back, yet despite attracting major publishers they racked up only modest sales.

He then set himself the challenge of writing a book in ten minutes with What Every Man Thinks About Apart from Sex being the result.

The entirely blank book went on to top it’s category list in Amazon and was even in the top 50 of all books (reaching number 44), outselling titles by established authors such as JK Rowling and Dan Brown at one time.

Mr Simove said: “I always dreamed of becoming a best selling author and, like many aspiring writers, I grafted for five years to complete my first book  and get it published.

“I was gutted when it sold poorly but I was determined not to give up. So I spent another three years on my second book.

“When that bombed too I thought, there has to be another way, so I 'wrote' a book in ten minutes and published in in eleven days.

“What Every Man Thinks About Apart From Sex, changed my life. Suddenly I was travelling the world speaking at events and literary festivals.

“Seeing the foreign editions come out with their translated covers was a real thrill, but the biggest buzz has to be the Guinness World Record.

“Getting that recognition was fantastic and I set myself the further challenge of trying to beat my own record.

“Unfortunately my first follow-up had to be scrapped because EL James didn’t like it but here I am again with another attempt.”

According to the cover notes of Simone's sleep book, How to Cure Insomnia presents 'a groundbreaking and yet proven method that guides the reader through the sleep process in no time at all. The book has been based on an ancient remedy that has been excitingly brought up to date using the latest technology available.'

Mr Simove admits the book is something of a novelty item but adds that he genuinely hopes it offers relief to some insomniacs.

He said: “I have struggled with my own sleep for many years and have tried most things from a hot bath at bedtime to lavender under my pillow to herbal sleeping pills.

“Having tried all these things I honestly believe there is nothing better than counting sheep and How to Cure Insomnia offers the first numbered, step by step guide, to doing just that.”

The numbered cartoon sheep in the book seem to break into a run when the book is flipped though.

Mr Simove added: “I hope it brings some light relief to the lives of the sleep deprived. I’m convinced this book has the potential to save the NHS millions and to make the world a better place.”